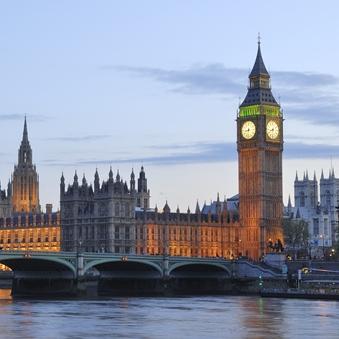 One of the world's foremost cities, London offers a wealth of fabulous attractions, including royal palaces, world-class museums and fashionable boutiques. See the Crown Jewels in the Tower of London, visit the monuments in St. Paul's Cathedral and Westminster Abbey, and marvel at the treasures stored in the National Gallery and the British Museum. Spend an evening at a West End theatre, or see a performance at Shakespeare's Globe. No trip to London would be complete without visiting Harrods department store. Take a boat east along the Thames to Maritime Greenwich where the meridian runs through the Royal Observatory. In the other direction are Kew Gardens, the beautiful Hampton Court Palace and the dramatic staterooms of Windsor Castle. The university cities of Oxford and Cambridge, both with their myriad of courtyards and chapels, lie further afield. Near Oxford, the grandiose Blenheim Palace was the birthplace of Sir Winston Churchill and he is buried in the local churchyard. 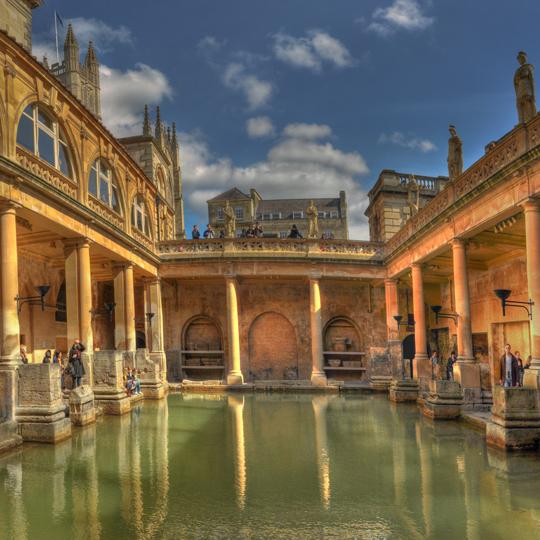 The White Cliffs of Dover are often the first iconic view of England for those arriving from France.Along the southern coast are many resorts including Brighton, where the flamboyant Royal Pavilion is reminiscent of more decadent times. Passing the ducal residences of Arundel Castle and Goodwood, Portsmouth is home to Nelson's ship, the HMS Victory, flagship of the Royal Navy. Take a ferry to the Isle of Wight, where Queen Victoria's private home at Osborne is located. In the Cotswold Hills, quaint villages cover a rolling landscape.To the north lie imposing Warwick Castle and Shakespeare's Stratford-upon-Avon. To the south is Bath, originally a Roman city that is embellished with elegant Georgian streets. Stonehenge, the most mysterious and celebrated of all ancient European monuments is nearby and Salisbury Cathedral boasts the highest spire in England. The southwest of England, home of clotted cream and Cornish pasties, has a dramatic coastline where fishing villages nestle in inlets, loved by generations of artists. The warm climate permits gardens to flourish, and at the Eden Project many non-native plants are cultivated in the world's larget indoor rainforest. In contrast, miniature ponies roam free on wild Exmoor and Dartmoor. 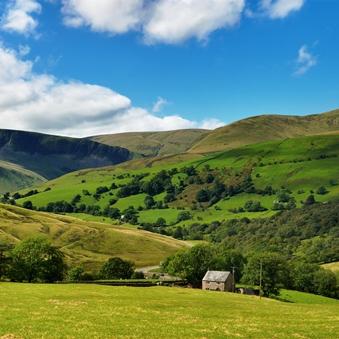 This region presents striking upland landscapes, including the Yorkshire Dales (immortalised by James Herriot) and the Lake District, one of the most picturesque areas of England that inspired writers like William Wordsworth and Beatrix Potter. York is a city blessed with historic buildings including York Minster, the largest medieval church in England. Chester is an ancient town complete with city walls and half-timbered stores. Liverpool, birthplace of the Beatles, was formerly the centre of the world's maritime trade. Little survives of Hadrian's Wall, built by the Romans across Britain. More recent structures include Alnwick Castle (Hogwart's School to Harry Potter fans) and Durham Cathedral. Magnificent country houses include Castle Howard and Chatsworth. 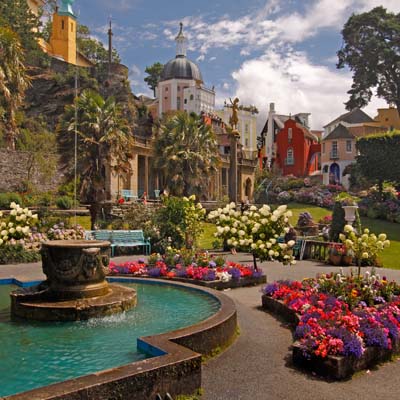 Once the world's busiest coal ports, Cardiff has reinvented itself as a modern capital city. The reminders of industrial wealth are still present in the opulent state apartments of Cardiff Castle and the grand galleries of the National Museum of Wales. Caerphilly Castle ruins dominate a valley where coal was once mined. In South Wales, Tintern Abbey and St. David's Cathedral are noted ecclesiastical monuments. North Wales is dominated by the rugged mountains of Snowdonia, it is here that some of the finest medieval castles in Europe are located. The bristling turrets of Caernarfon and Conwy remind us of the violent conflicts between England and Wales that took place here. The engineer Thomas Telford opened up the region to commerce by building roads, bridges and canal aqueducts, and a number of miniature steam railways were built to export slate from the quarries. A charming oddity is Portmeirion, an Italianate village built as a Utopian example of urban planning. 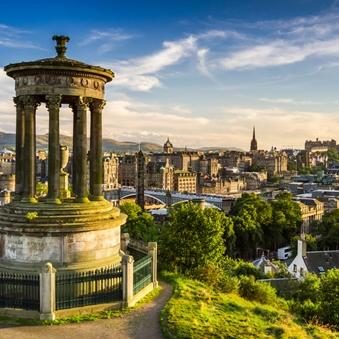 With Scotland's most famous castle dominating the city, Edinburgh provides a fantastic introduction to Scotland. The dramatic Old Town extends from the Castle to Holyrood, home of royal government in Scotland. The neighbouring New Town comprises fine Georgian streets, and the Royal Yacht Britannia is moored in Leith docks. Outside Edinburgh, explore ornate Rosslyn Chapel (featured in The Da Vinci Code)and country houses like Abbotsford built by novelist Sir Walter Scott. Glasgow, once the world's centre of shipbuilding, boasts fine art nouveau designs by Charles Rennie MacKintosh. The Clyde Coast, dominated by Culzean Castle, was home to poet Robbie Burns. The Trossachs and Loch Lomond offer magnificent scenic vistas. Stirling Castle, Scone Palace and Glamis Castle all have royal associations. Of the many golf courses in this region, St. Andrews is known as the game's spiritual home. 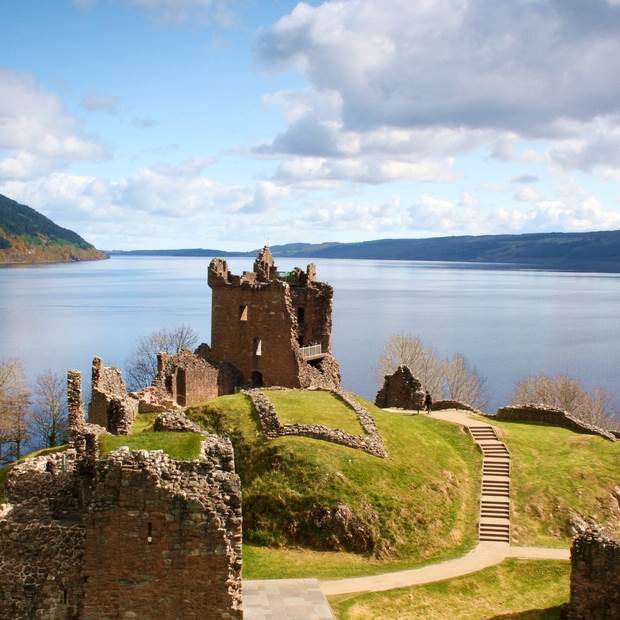 Home to the fabled Loch Ness Monster and the highest mountain in the United Kingdom, Ben Nevis, the Scottish Highlands have a fantastic landscape of hills, forest and Lochs that are punctuated by the crumbling ruins of castles and historic battlefields.

Inverness is an excellent base from which to explore the stark beauty of the Highlands, following the roads and rivers through traditional communities out the the windswept coast. You can also tour the Scottish Islands, such as the Isle of Skye and the Isle of Mull, whilst always being sure to take the opportunity to stop at any distilleries along the way to sample a dram of whiskey. 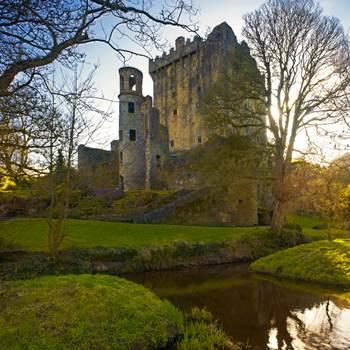 Blessed with delightful architecture and peaceful parks, Dublin boasts cool designer boutiques and a thriving nightlife. Sights include Trinity College, the illuminated book of Kells and Dublin Castle. See the presidential palace in Phoenix Park and visit the Guinness Storehouse to sample Ireland's favourite drink. The province of Leinster encompasses the bleak Wicklow Mountains, the heathland of the Curragh, and the pastoral valleys known for horse breeding, interspersed with country houses such as Russborough and Powerscourt. In Munster, the southwest of Ireland, the pastures around the Rock of Cashel and the Shannon blend into the breathtaking coastal vistas of the Ring of Kerry, Dingle and the Cliffs of Moher. Near Cork and Limerick, Blarney and Bunratty Castles are iconic sites. In the northwest, Connaught is a stark and windswept province where Ashford Castle serves as the gateway to the wild landscapes of Connemara. Galway is a thriving town known for oysters and marble wares.