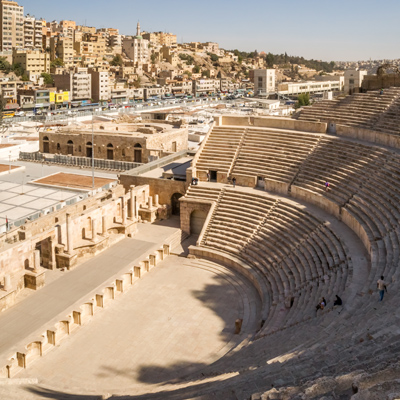 No more than five hours drive from anywhere in the country, the capital city of Amman is a convenient base for any tour. Business and the arts are thriving here, and there are first-rate hotels, restaurants, galleries and shops. High above the city, at the ancient Citadel, observe the traces of Amman's many lives: the regal columns of a Roman temple, the elegant capitals of a Byzantine church, endlessly inventive carvings in the Umayyad Palace, fascinating displays in the Archaeological Museum, and digs and ruins everywhere you step. At the foot of the Citadel, take a seat in the Roman Theatre, a deep-sided bowl carved into the hill and still used for cultural events. For a glimpse of recent history, take a ride on the Hijaz Railway. This famous train was repeatedly sabotaged by the troops of Sherif Faisal and Lawrence of Arabia to defeat the Ottomans. Stroll through shops and suqs (markets), pause in the coffeehouses for a game of backgammon, or savour the sweets and mezzeh (appetisers) of traditional Jordanian cuisine. 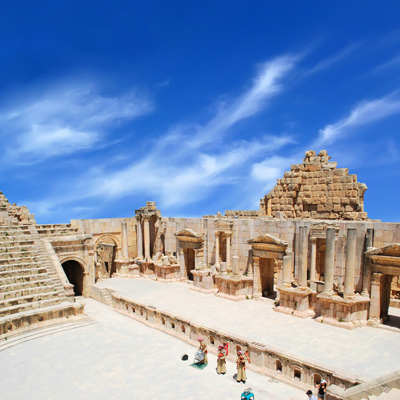 Located north of Amman in the biblical land of Gilead, Jerash lies sheltered in a fertile valley. The city flourished in the first century AD and at its height, Jerash was home to over 25,000 people. Theatres and temples were continuously built during this time. The south theatre, the biggest of Jerash's three amphitheatres, is still used for performances of international music and dance groups at the annual Jerash Festival every summer. In 330 AD Emperor Constantine announced that Christianity would be the new religion of the Roman Empire's eastern half, and Jerash fell into the newly formed Byzantine segment. A spate of building ensued, some temples were transformed into churches, and many new churches were erected, with mosaic floors similar to those found at Madaba. The massive ruins are spread over a large area divided and crisscrossed by colonnaded streets whose pavements still show the grooves of chariot wheels. The city is so well preserved that it feels as if it was just recently inhabited. 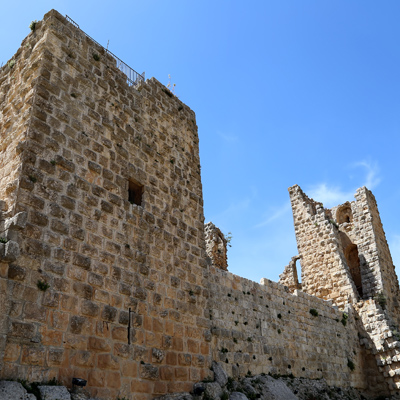 The city of Ajloun in northern Jordan is home to Ajlan Castle, or Qalat er-Rabad as it is known in Arabic. Located on a high peak overlooking the city, this fortress was built between 1184 and 1185 by one of Salah-Eddin's (Saladin) nephews to protect the country against the Crusaders who had built castles in Kerak and Shobak. The fortress was also located strategically for controlling the iron mines at Ajloun. The Mameluks later enlarged the original building, before the Mongols conquered it in 1260, additional features have been added to the castle since then. A deep ditch cut inside the rock surrounds the castle, and the drawbridge has been replaced today by an iron footbridge to give visitors access to the fortress. 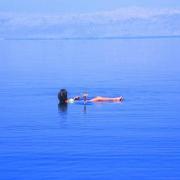 Ever since the days of Herod the Great, people have flocked to the Dead Sea in search of its curative secrets. Due to high annual temperatures, low humidity and high atmospheric pressure, the air is extremely oxygenated. With the highest content of minerals and salts in the world, Dead Sea water possesses anti-inflammatory properties, and the dark mud found on the shores have been used for over 2,000 years for therapeutic purposes. The excavations conducted at Bethany have uncovered a first century settlement with plastered pools and water systems that were used almost certainly for mass baptisms, as well as a fifth to seventh century Byzantine settlement with churches, a monastery and other structures most probably catering to religious pilgrims. A survey made about the site has documented its role as part of an ancient sacred pilgrimage route that linked Jerusalem, the Jordan River and Mount Nebo. John the Baptist started his mission in the land of modern Jordan and it was at Bethany that he baptised Jesus. Arrested by Herod Antipas, John the Baptist was imprisoned in the fortress of Machareus (modern Mukawir) before being beheaded upon the request of Salome, Herod Antipas' stepdaughter. 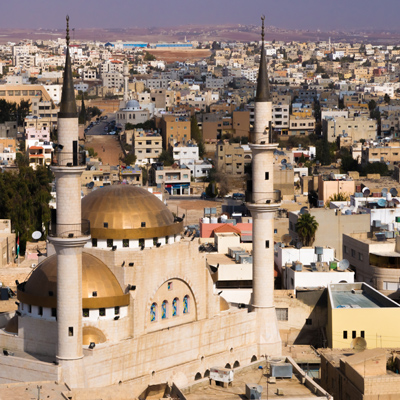 Madaba, the "city of mosaics", stands perched on an archaeological site with more than 4,000 years of history buried beneath it. The quality and quantity of Byzantine and Umayyad mosaics found in Madaba have made it one of the most prominent cities in the world for mosaics. St. George's Church houses the famous mosaic floor depicting a map of Palestine and the Nile delta. Centrally located is a detailed map of Jerusalem as it was during the sixth century AD. 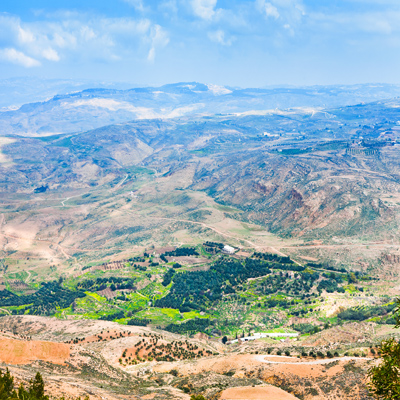 Mount Nebo is the mountain where Moses was allowed to see the Holy Land, but not allowed to enter it. Today the mountain is a memorial site and includes the "Church of Moses", built by the first Christians. Ever since the first days of Christianity this mountain has been a holy place and a destination for pilgrimage. Like Moses, you can have a great view over Jordan, the Dead Sea and Israel. When the weather is clear, you should even be able to see Jerusalem, which is about 60 kilometres away. For the best chance of a great view, come early in the morning or late in the evening. 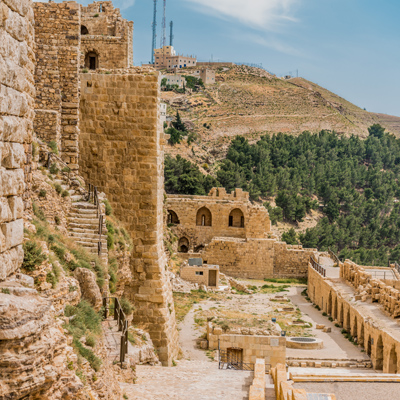 Kerak lies 140 kilometres south of Amman and was chosen by the Crusaders as the location for their stronghold due to its advantageous location. Situated mid way between Jerusalem and Shobak, another Crusader castle, Kerak is perched on a hilltop 1,000 metres above sea level and surrounded on three sides by a valley. Construction of the castle began in 1142. After Salah-Eddin conquered it in 1189, it was amply rebuilt and enlarged. A steep drop of the terrain naturally protects the south and north sides, while a ditch surrounded the castle for additional protection. Living rooms, storage rooms, courts, stairs and turrets are still largely visible, giving an idea of how mighty this fortification was in its heyday. Never inhabited by a court, but mainly a defensive stronghold, the different utilities are still clearly identifiable. 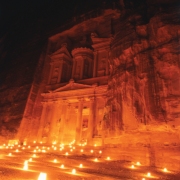 A World Heritage Site, over 800 monuments can be found in Petra. Known as "the red rose city half as old as time", Petra was built from 800 BC to 100 AD by Nabetean Arabs and covers an area of about 100 square kilometres. In this era Petra was a fortress, carved out of craggy rocks in an area which was virtually inaccessible. In the first and second centuries, after the Romans took over, the city reached the peak of its fame. When shipping slowly displaced caravan routes, the city's importance gradually dwindled. It fell into disuse and was lost to the world until 1812, when it was re-discovered by the Swiss explorer Johan Ludwig Burckhardt. These days Petra is Jordan's premier number tourist attraction and the Khazneh (the treasury) starred in Indiana Jones and the Last Crusade. 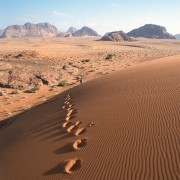 The landscape of Wadi Rum with its immensity, colour and awe-inspiring shapes creates an almost supernatural atmosphere. Otherwise known as the "Valley of the Moon", it was the setting for the film Lawrence of Arabia and the actual location where T.E. Lawrence set his camp. Lawrence's book The Seven Pillars of Wisdom was named after the seven natural columns varying in height located en route to Wadi Rum. Bedouin camps are present in the Wadi which is still home to a number of Bedouin families who welcome visitors with the hospitality and generosity that Bedouins are so famous for. Explore the desert with a 4x4 driven by a local Bedouin, or overnight in a real Bedouin tent, in the middle of the desert. 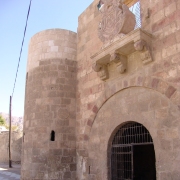 Aqaba is the name of the modern port of Jordan, built over the remains of several very ancient sites. After the discovery of a Chalcholithic site Tell Maquss, there have been extensive excavations on the sea front to unearth the remains of Ayla, likely to be the biblical port Salomon. Apart from its long history, Aqaba is also renowned for its crystal clear, all year round warm waters with the most spectacular coral reef in the Red Sea.